Built on top of the existing FileDirectory/ServerDirectory included with Squeak 3.8 and 3.9, Banyan should be platform independent, but has been tested on the following:

By downloading Banyan, you agree to the following license.

Permission is hereby granted, free of charge, to any person obtaining a copy of this software and associated documentation files (the "Software"), to deal in the Software without restriction, including without limitation the rights to use, copy, modify, merge, publish, distribute, sublicense, and/or sell copies of the Software, and to permit persons to whom the Software is furnished to do so, subject to the following conditions:

The above copyright notice and this permission notice shall be included in all copies or substantial portions of the Software.

THE SOFTWARE IS PROVIDED "AS IS", WITHOUT WARRANTY OF ANY KIND, EXPRESS OR IMPLIED, INCLUDING BUT NOT LIMITED TO THE WARRANTIES OF MERCHANTABILITY, FITNESS FOR A PARTICULAR PURPOSE AND NONINFRINGEMENT. IN NO EVENT SHALL THE AUTHORS OR COPYRIGHT HOLDERS BE LIABLE FOR ANY CLAIM, DAMAGES OR OTHER LIABILITY, WHETHER IN AN ACTION OF CONTRACT, TORT OR OTHERWISE, ARISING FROM, OUT OF OR IN CONNECTION WITH THE SOFTWARE OR THE USE OR OTHER DEALINGS IN THE SOFTWARE.

Banyan itself is a one-click install from SqueakMap. However, if you will be using it to backup to/from an FTP server, you will need to load the bug fixes in the change-set attached to this bug:

To perform a backup, the following interaction between user and software takes place:

It's easy to instantiate the backup instance. Just:


As indicated, the source or target may transparently be an instance of FileDirectory or ServerDirectory, but at least one of them should be a FileDirectory, otherwise it would be very inefficient (and has not been tested anyway). If they are both FileDirectory's and OSProcess is loaded, Banyan will generate a copy script to perform the copying that the file timestamps will be preserved.

When using a ServerDirectory, it is important to specify keepAlive: true. Here is an example backing up the local filesystem to an FTP server:

Sometimes you may wish to avoid backing up certain files, like temporary files or certain entire directories. This is very easy to accomplish via a where: block. It takes one argument which is the instance of MaDeltaDirectoryEntry. This gives great flexibility in the filtering because you have:

- an OrderedCollection of the entire path (relative to the source or target root) to that node (its #pathAndName)
- the entries within each root directory (source and target) that were present at that pathAndName, so you can compare names, dates, or sizes.


Exclude any files that begin with an underscore character:


Exclude any files whose sizes are equal:

After specifying the where: criteria (if necessary), there are special preparation methods which specify the backup-logic. The choices are, in order of most to least conservative:

At this point, nothing has been done to the filesystem. But you can view what will be done with either of #viewProposedTarget or #viewProposedChanges is used.


The screenshot below shows the results of #viewProposedTarget after selecting the #prepareToMakeTargetLikeSource option. Since the target will be made to be just like the source, see how it will delete the "target Only" stuff ("in Target Only", "target Only Sub" and "file1"). 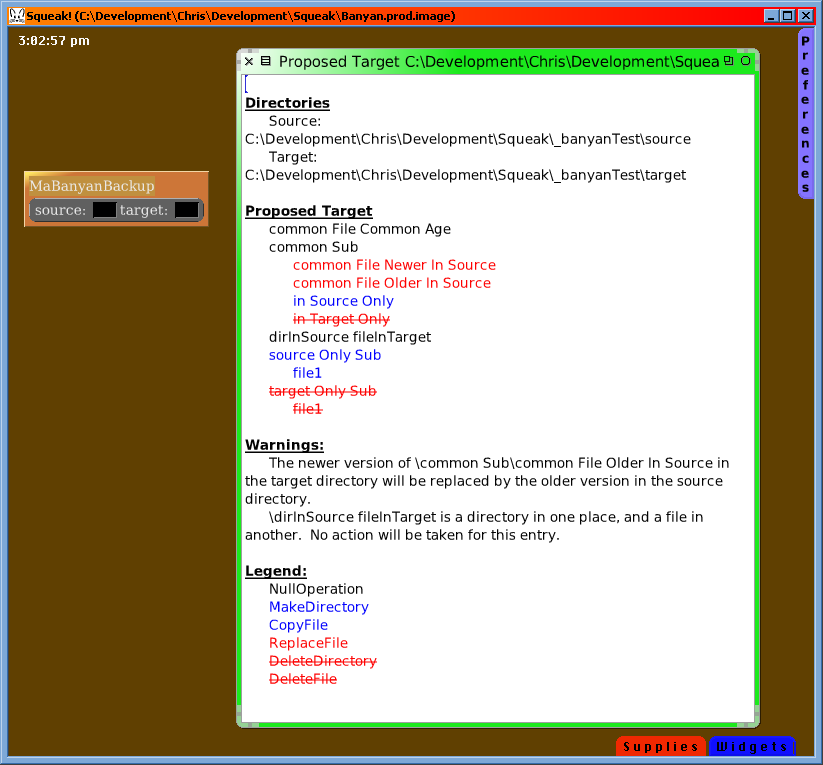 #viewProposedChanges is nicer for larger directories, because it will just show the entries being changed (and the full path to them), which can significantly reduce the size of the report.

After viewing the backup, you may notice a particular entry that was not caught by the where: that may need to be removed. Rather than have to start over and special-case it, the #removeOperation: can be used.

When satisfied with what the backup will do, simply execte it:

1. OSProcess must be installed.
2. None of the source or target directories may be ServerDirectory's. They must all be FileDirectory's.

If both of these conditions are satisfied, Banyan will create a script to be executed by the operating system. The script generated is specific to the operating system on which it is running (which is determined by checking whether SmalltalkImage current platformName is 'Win32', if it is, it uses the MaBanyanWindowsStrategy otherwise the MaBanyanLinuxStrategy).

If one or both of the conditions are unsatisfied, Banyan will copy the files via Smalltalk (and FTP if a ServerDirectory is involved), which will cause the files to be stamped with the current time.

A Special Note about ServerDirectory

While creating Banyan, several bugs in ServerDirectory were discovered and fixed. For Banyan to work with ServerDirectory's, you must file in the fixes at:

A Special Note about TimeZone

When using a ServerDirectory, most ftp servers will report timestamps in GMT time, not local time. Therefore, the above ServerDirectory fixes also include an extension to TimeZone which allows you to specify your #local time-zone and will convert timestamps received over FTP accordingly. This could be important for comparing file dates, so Banyan will warn you if you haven't set your time-zone to something other than GMT when using with a ServerDirectory.

A Special Note about Windows

There is no way in Windows to generate a non-interactive copy script unless all target files have their read-only flag set to false. Yes, xcopy has /R (overwrites read-only files), but it can't handle when the target file does NOT exist; it prompts you whether the target is a directory or a file. Ridiculous.

So, for performing Windows-to-Windows backups, it may be necessary to unset the targetDirectory's Read-only flag.

Banyan can also generate a useful report showing space utilization similar to the du report in Linux, but more refined. To use it, just send #maOpenSizeTreeForEntriesLargerThan: to any FileDirectory or ServerDirectory.


Here is a sample of that output:


About the Model / How it Works

Banyan creates a tree in memory of the source and target directories and merges them into one in-memory tree, represented by a MaDeltaDirectory. Each node of this merged tree is a MaDeltaDirectoryEntry, which contains an OrderedCollection standard DirectoryEntry's. The OrderedCollection, with one element for each directory (usually two), corresponds to the source and target directories.

Example
Suppose we have the following source directory:


and the following target directory:

Banyan uses this merged tree to construct another in-memory tree of the FileOperations that will be executed. In this way, the entire effects of the backup can be observed before executing.

MaDeltaDirectory is the basis for the backup operations. It can compare any number of directories, not just two. For more information, see MaDeltaDirectory.

MaBanyanFileSearch is a prototype for finding files matching any critieria. It has only one method in its API:

MaBanyanFileSearch >> #filesWhere:do:
"Traverse all the files and directories from my root and evaluate twoArgBlock for each path and entry satisfied by searchBlock. The arguments to searchBlock and twoArgBlock are the path of FileDirectory's leading to the second argument, the FileDirectoryEntry."

To use, create a MaBanyanFileSearch from the root FileDirectory where the search is to begin:

Then tell it to do something to files matching particular criteria:

Examples
"Files that begin with an underscore character."


"Everything except the temp directory"

Banyan gets its name from its likeness to the real tree of the same name; a tree that merges itself with another tree. The MaTree class makes merging trees and then selecting branches very easy.

The implementation of all these functions rely almost solely on two core extension methods to FileDirectory: