Today's IT industry is developing and selling lots of new hardware and software technologies. People are now able to buy and use small personal devices with a modern and rich user interface experience. We use operating systems like Windows, MacOS or Linux and graphical computer interaction in our daily work. Did you know that the roots of these technologies are directly related to a single programming language called Smalltalk?

Smalltalk was developed in the Learning Research Group (LRG) at Xerox's Palo Alto Research Center back in the early 70s. The group was led by Alan Kay who worked on a vision he called "Dynabook" - the computer could be used creatively like a dynamic book. even by children. Their explorations led them to develop not only the prescient vision of notebook computing (the Dynabook), but also to the Smalltalk object-oriented programming language. The first Smalltalk programming system (called Smalltalk-72) run on a ""and was designed to support Alan Kay's new programming paradigm called object-oriented programming.

One persistent myth about the work of Xerox in this era is that PARC invented the mouse and graphical user interface (GUI). The mouse was invented by Doug Engelbart and others at the Augmentation Research Center (ARC); the GUI has its roots in systems such as Sketchpad, Grail, and ARC's NLS. What Kay and others accomplished involved striking improvements on these elements. They invented elements of the interface now so natural that we take them for grantedfor instance, overlapping windows.

In December 1979, the Xerox Palo Alto Research Center developed the first prototype for a GUI. A young man named Steve Jobs, looking for new ideas to work into future iterations of the Apple computer, traded US $1 million in stock options to Xerox for a detailed tour of their facilities and current projects. One of the things Xerox showed Jobs and other members of the Apple Lisa team was the Alto machine, which sported a GUI and a three-button
mouse. When Jobs saw this prototype, he had an epiphany and set out to bring the GUI to the public.Apple Computer then commercialized and refined the GUI into a system very much like that we use todaya system which became nearly ubiquitous after its adoption in Microsoft Windows. The first popular personal computer, the Apple 2, was a hit - and made Steve Jobs one of the biggest names of a brand-new industry.

This is what Steve had to say about his visit to
Xerox Parc.

"And they showed me really three things.
But I was so blinded by the first one I didn't even really see the other two.
One of the things they showed me was object orienting programming they showed
me that but I didn't even see that. The other one they showed me was a
networked computer system...they had over a hundred Alto computers all
networked using email etc., etc., I didn't even see that. I was so blinded by
the first thing they showed me which was the graphical user interface. I
thought it was the best thing I'd ever seen in my life. Now remember it was
very flawed, what we saw was incomplete, they'd done a bunch of things wrong.
But we didn't know that at the time but still though they had the germ of the
idea was there and they'd done it very well and within you know ten minutes it
was obvious to me that all computers would work like this some day."

It was a turning-point. Jobs decided that this
was the way forward for Apple. In 1997 the New York Times reported:

"Steve Jobs told his audience that
during his legendary visit to Xerox's Palo Alto Research Center in the late
1970's, where he first saw the technology that he commercialized in the
Macintosh, he had missed some fundamental components. Mr.
Jobs said he had been "blinded" by Xerox's graphical user interface
and had overlooked both the company's Smalltalk programming language and its
powerful office network

"If I'd only stayed another 20 minutes," Mr. Jobs said today"

The
Smalltalk user interface of the Xerox Alto III

The work in the LRG continued and after experiments were performed on
Smalltalk-72, a sequence of languages ending in Smalltalk-80
were developed:


A
licensing program at Xerox and Xerox Special Information Systems distributed the
Smalltalk development environment to a limited number of developers and large
companies. Mainstream development community distribution did not occur until a
new venture-funded company named ParcPlace Systems, Inc., headed by Adele
Goldberg, hit the streets running. They sold Smalltalk as Smalltalk-80,
then renamed the product to ObjectWorks and later VisualWorks
Smalltalk.

A
second Smalltalk (Smalltalk/V) was developed by Digitalk in Los Angeles,
California, with funding from Ollivetti and other customers. This Smalltalk
addressed the need for a small, high-speed, PC-based product. Prior to
acquisition by ParcPlace Systems, Inc., Digitalk was the volume sales leader.

IBM
developed the VisualAge for Smalltalk product family in collaboration
with Object Technology International Inc.
A
number of new Smalltalks were developed after this:

Continue here with the story of ParcPlace in 1980,
the merge with Digitalk, the beginnings of Squeak and Java. (don't forget to
mention Animorphic) 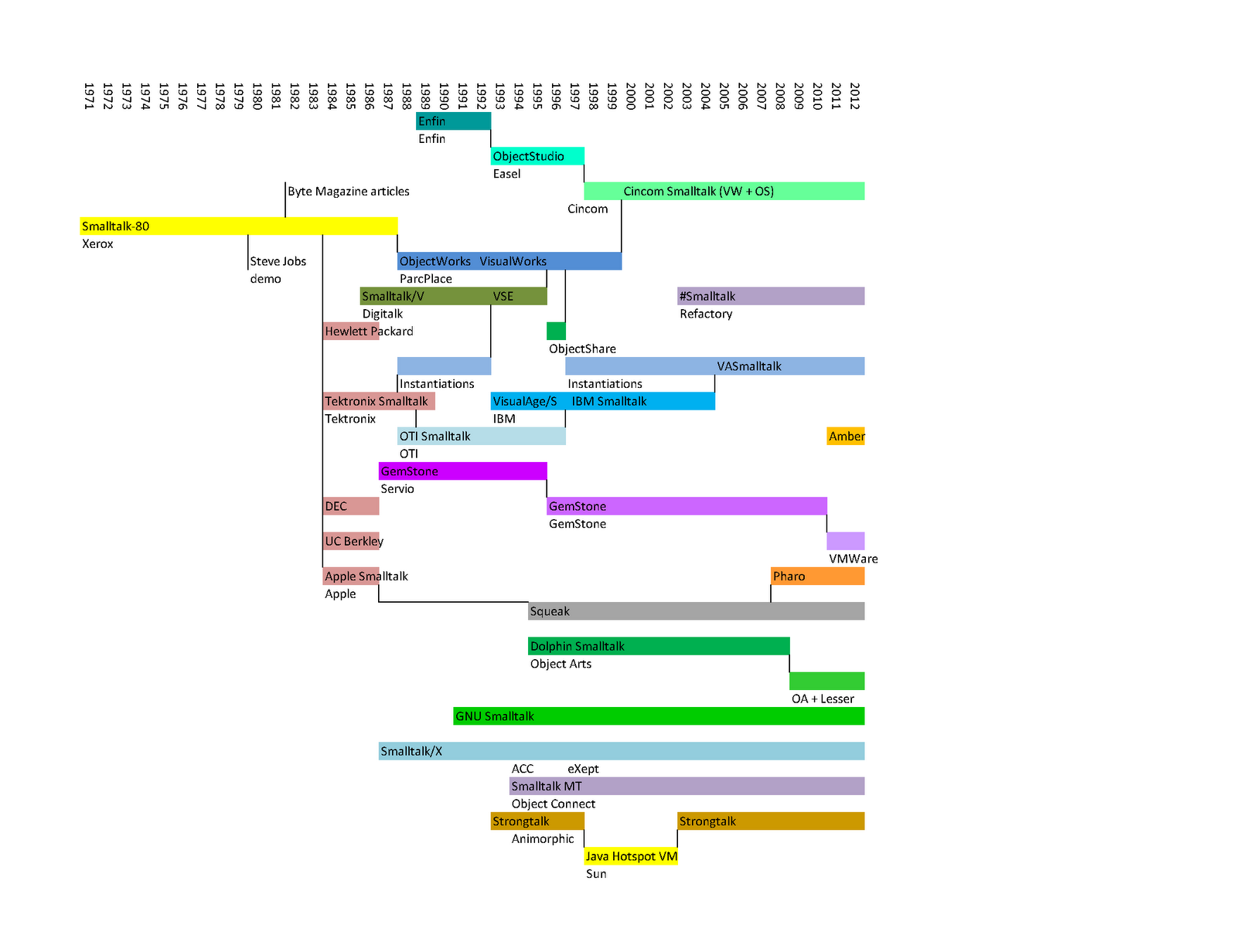